ORGANIZATION OF THE YEAR NOMINEES

The Business of the Year Award is presented to a Chamber Member who has demonstrated outstanding business ethics, community support, leadership, friendly service and has been an overall benefit to the community.

(must be in good standing, membership current)

2020 Organization of the Year

Zeke Crozier, a medically retired Army Staff Sergeant served nine years with the Chinook Helicopter Unit operating out of the New Century Air Center in Gardner, KS. Zeke was deployed for Humanitarian missions to Pakistan & Africa and two combat deployments to Afghanistan in support of Operation Enduring Freedom.
Then June 25, 2011, as a Crew Chief in Afghanistan, Zeke’s Chinook Helicopter crashed while on a mission. No one died, though Zeke and another soldier were severely injured. Zeke experienced a traumatic brain injury. In a coma for two weeks, he was expected to suffer from severe disabilities for the rest of his life. Doctors were unsure if Zeke would ever walk or talk again.
However, a miracle happened. Zeke woke up. Because the left side of his body including his face was paralyzed, he had to learn everything over again. With support from his wife, Lacy, he progressed from a wheelchair to relearning how to walk and talk. Zeke gained a second chance at life. While Zeke was in the hospital, members of his unit died in another crash shot down in August 2011. It is the worst loss of American lives in a single incident in the Afghan War, and it made international headlines.
In 2013, Zeke was awarded the Purple Heart and medically retired from the Army. Struggling to find a new purpose, Zeke found a therapeutic outlet in creating unique pieces of art using bottle caps. This hobby became a thriving business. Art gave Zeke a new lease on life and he wanted other veterans and people of many diverse backgrounds to experience the joy of making things with their hands but more importantly, connecting with the community through art.
Handy-Cappin’ is dedicated to helping individuals who suffer from mental health issues, disabilities, and PTSD. Handy-Cappin’s mission is to make a difference as a fundraising partner with other organizations to benefit people with disabilities, veterans, and their families.
Handy-Cappin's vision is to make possible one-of-a-kind and meaningful experiences to honor those who survive, thrive, and overcome adversity– to honor those that have served in the military and those that have fallen, to support and encourage people with diverse abilities.

​BUSINESS OF THE YEAR NOMINEES

VOLUNTEER OF THE YEAR NOMINEES

The Chamber Champion Award ​is a special award created for 2020 to recognize the business who persevered through the pandemic and got creative, thought outside of the box, and pushed through the obstacles of COVID-19 to end the year successfully.

(must be in good standing, membership current)

​​The festivities begin at 5:30 p.m. at the Garnett Knights of Columbus Hall. Tickets are $20 for Members and $25 for Non-members. Call us today to reserve your tickets!​

CONGRATULATIONS TO OUR NOMINEES!​ 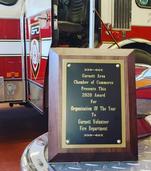